If you’ve watched the latest Pixar movie Inside Out, you’d probably remember one of the characters named ‘Anger’. This red, hot-headed creature, somehow managed to remind me that this seemingly negative emotion has a key effect in the virality of social media content.

The researchers at Beihang University in China have already discovered that some sentiments travel faster than others on Sina Weibo. The gist of their paper tells us that:

‘Joy moves faster than sadness or disgust, but nothing is speedier than rage.’

Anger, amongst any other emotions studied, is quicker to reach a wider audience across the network. Having analysed 70 million tweets, the researchers found that users on Sina Weibo reacted most outrageously and quickly to posts regarding some social issues. And anger is highly contagious, as users shared their emotions with one another, causing a chain reaction of anger.

Is it a global phenomenon?

But would it be possible that such effect is strictly confined to the particular context (Sina Weibo)?

The reality is that a similar conclusion was drawn from a research by Jonah Berger, a professor of marketing at the Wharton School. “Anger is a high-arousal emotion, which drives people to take action,” he says. “It makes you feel fired up, which makes you more likely to pass things on.” After analysing 7000 articles published over a 3 month period, they found that ‘the likelihood of content going viral had less to do with the positive or negative tone of an article,’ – it had more to do with the reader’s reaction after reading it.

A closer look at some recent viral news makes the finding more convincing. Take Donald Trump for example. Why does he seem to get more coverage than any other candidates? Why his tweet gets more shares and attention?

Justin McConney, the force behind his successful online campaign, has apparently advised Trump to feed fans and supporters with what they want. Which, in this case, means controversy – ‘the more outrageous the content, the better’.

I will be using Facebook and Twitter to expose dishonest lightweight Senator Marco Rubio. A record no-show in Senate, he is scamming Florida

Many of his controversial tweets result in spurring resentment among both supporters and haters. The exact same tweet could provoke one group, while it could also mobilise another. But it is the same kind of energy they share: anger, which encourages both groups to share their stances. So it is barely a surprise when his message often gets across wider and faster at zero cost. His supporters reportedly share their own personal stories that bolster their shared narrative – consisting of both facts and fabrications – that simply amplifies the feel of resentment.

The other side of the coin

Having said that, we shouldn’t ignore the positive role of anger plays on social media either. As usual, the big picture is much more complex. In our old post, we talked about the influence of social media on the Arab Spring in 2013.

‘By looking at the Arab Spring, and now at what is going on in Turkey, we could say that social media can indeed have a purpose: to allow people to show their indignation, their anger and frustration, to organise and come together, for a radical change.’

Now that’s an undeniable piece of evidence of how anger helped spread a good cause and mobilised people. Twitter and Facebook can be a proven tool that helps keep a world better place. And in this case, anger can be an important and useful sentiment to disseminate a positive cause more effectively than others on social media.

But isn’t it a risky game to play for marketers?

If there is an alternative emotion that can stack up against anger, then that would be ‘awe’. Now, here is a good news for those who don’t want to employ Trump’s outrageous tactics: Berger’s study has also found that awe was the one emotion that actually outpaced anger. Isn’t it rather encouraging to know that the feeling of wonder and excitement is more powerful than that of rage and fear? “Awe gets our hearts racing and our blood pumping […] This increases our desire for emotional connection and drives us to share’’, says Berger.

That means content that astonish and inspire people are more effective at getting people participate and interact in online conversations. In the field of marketing, content that elicit anger runs a higher risk, because surely no brands want to be associated with negative emotions. But a feel of surprise or amazement that couple potentially subverts user’s expectations is a key ingredient to creating viral content. 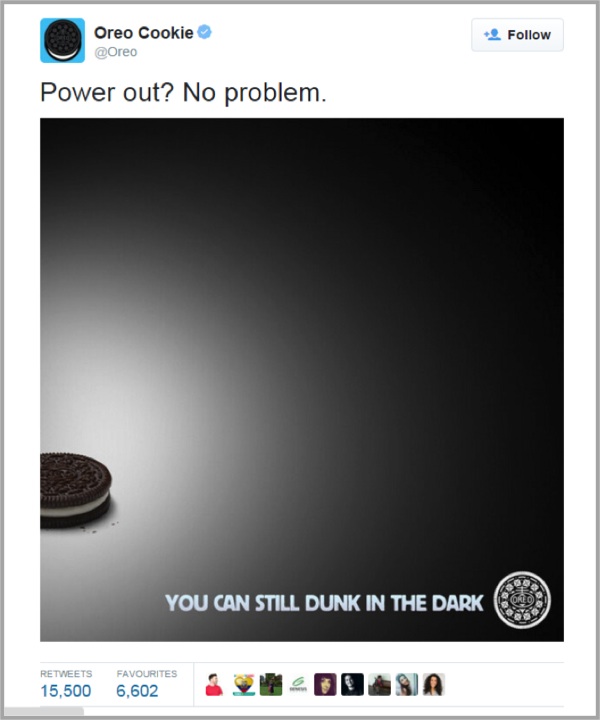 (Oreo’s Super Bowl Blackout tweet astonished many with its timely response to the real life event (via).)