A few months ago, Adweek posted a rather interesting research, claiming that ‘Sure Tumblr has an artsy, hipster appeal, but its users are far from starving. In fact, and perhaps surprisingly, it caters to the wealthiest social media set of any of its rivals, according to recent data.’

Moreover,‘“Not only do our users have the greatest spending power, but they also spend the most time on our platform,” said Lee Brown, Tumblr’s global head of brand partnerships. “They are both engaged and active, taking that next crucial step to buy what they discover on Tumblr (and then post about it).

“The customer journey begins on Tumblr with prepurchase aspiration and ends on Tumblr for postpurchase celebration, making Tumblr the ultimate destination for shopping,” Brown said.’

At this point, it shouldn’t be too difficult for brands to understand how to behave on Tumblr:

Beautiful imagery, lots of reblogs from other sources – influencers, “normal” users, up-and-coming brands, artists, and so on – that inspires and keeps the visitor on the site, wandering and roaming, lost in a Sea of Tranquility and spectacular content. 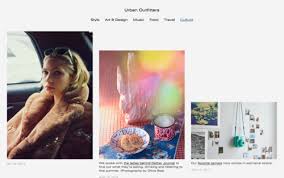 “Yes, but I want to sell!”, I hear you screaming like a Beatles teenager fan. Well, we already stressed several times before how the good old days of the “YOU NEED THIS, BUY THIS” approach are long gone, therefore it’s time to go for another technique: don’t be blatant. Check what the guys at Urban Outfitters do, in each section, for instance in “Music”: cool picture > nice link to an interesting article > rock icon > up-and-coming artist > discreet shot featuring product (if you click on it you’ll land on the website) > repeat the pattern > BOOM.

What it is about? Dior!

What are they talking about? Dior!

What are they trying to communicate? Dior!

Where is the storytelling? Dior!

What day is today? Dior!

Moreover, we all know Tumblr kids love GIFs, but to chop a TV ad into 234 bits and turn them into just as many GIFs, it really isn’t enough.

Furthermore, the bride that runs away from the altar, nicks a chopper, and flies away…seriously?