Fashion shows, live news broadcasting or show your wedding to the world – how Periscope can be used to promote your business.

Periscope, the future of social media?

You have probably heard of this new live-streaming app that people seem to be raving about. If not, read more here. 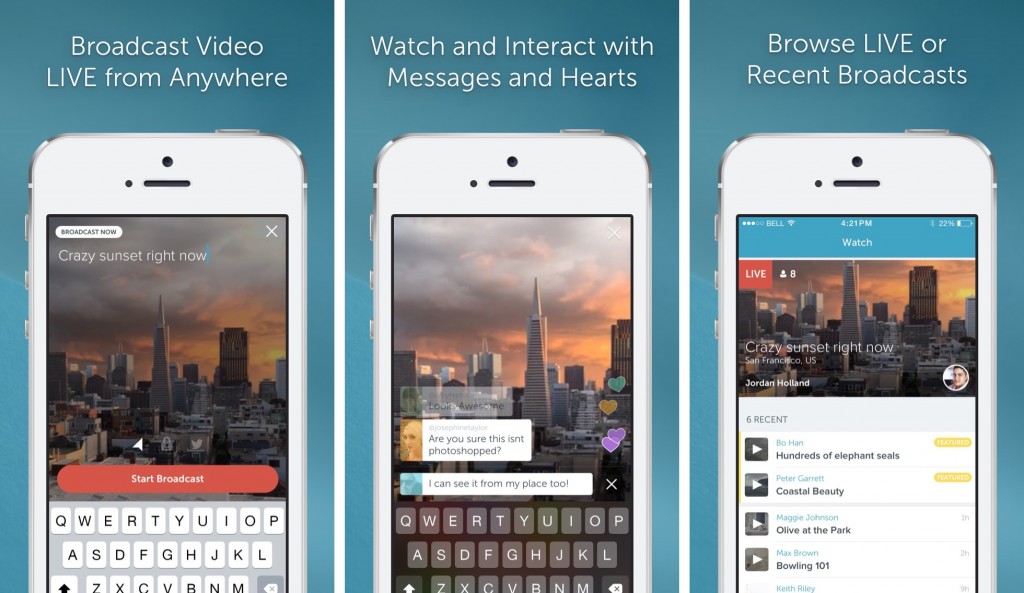 As Line has recently live streamed Burberry’s live show during the London Fashion Week, technology has made live streaming much more seamless and enjoyable.

We already have Instagram where we can get sneaky behind the scene looks of our beloved brands, and Vine for cheeky and funny branded videos. Even Snapchat, if you have a gazillion to spend in order to be featured on Discover.

But while the aforementioned platforms can support respectively 15, 6 and 10 seconds videos, with Periscope you can stream until your battery – or you – shuts down. So, you could stream in one video, no interruptions, the tension and the behind the scene before the fashion show, the action on the catwalk, then interviews and drinks after the event.

With Facebook or Twitter, digital narratives used to be constructed via words and images. But the art of storytelling is moving from simply ‘telling’ to ‘doing’, using Periscope. A storytelling via live-streaming will be able to deliver more compelling and stronger messages and effectively engage with others.

Show your kayaking skills to the world, or the art of falconry right here right now. Businesses selling experience-centred services, like AmaZing Venues could find potentials from Periscope as consumers now create and spread visual stories of their exclusive hotel experience, wedding venues or even kayaking adventures to those who might be interested.

The market today is never a static place, where information is constantly exchanged and updated. In the world we live in, ‘nothing stands still’, says Adrian Burton. Live-streaming apps like Periscope have a sense of urgency and spontaneity, feeding users with more contents and events of that particular moment. It is the answer to those hungry users who want to be instantly connected and always updated. Just like how people found out about the fire explosion in New York on Periscope, we might soon use such apps as one of the sources for first-hand information and experience, along with news media. Yes, Twitter works the same way, and it’s been the first platform for live updates about your Tube station operations or more serious events, but it has obvious limitations, e.g. a journalist using Twitter will constantly have to deal with the the 140 (minus the ones taken by the picture) characters, while with Periscope she will just need three smartphones or tablets with a fully charged battery.

‘So far, The Verge, The Guardian, Sky News and the BBC have already broadcasted using the app, and presenter Kay Burley used it behind the scenes of ITV’s Leader Debates in the UK.’ So here we see the rise of another source to get a glimpse of behind-the-scenes – e.g. streaming what is happening real-time behind the newsroom. For example, Sky news showed the view behind the camera and used the chat function to engage with the audience by encouraging them to post comments and questions (read more on theGuardian).

The Economist was also the first ones to utilise this app to explain deflation in the UK on a live stream where the economist correspondent answered questions from users. “Live streaming is fun and has the informality of Twitter rather than the seriousness of TV, so we should do more of it,” said the Economist’s deputy editor. So Periscope offers more rooms for News media to explain complex and insightful issues while keeping the informality to engage with a wider audience.

So, while the legal issues remain ambiguous, there are enough rooms for businesses to explore the potentials of Periscope.

(By Dani and Waka)

27/04/2015 Advertising Periscope 0. Comments BY Waka
Instagram Tools: Most Popular Apps to Grow and Manage Your Followers..
3 New Google Ads Performance Max Features For Boost In Customer Acquisition..
Instagram's New Full-screen Home Feed Update: What Marketers Need to Know..
Tinder Advertising: The Pragmatic Guide to Reach Young Audience..
How Can Retailers Supercharge Their Sales From Instacart Ads..
9 Tips On How To Create Attention-grabbing Instagram Ads For Stellar Sales..
Facebook Shops 101: Everything You Need To Know As An Ecommerce Business..
How Influencers React to COVID-19: A Survival Guide..
How to Use YouTube Advertising for Your Fashion Brand..
Why Should We Partner With Influencers?..
What does the Facebook News Feed Change Mean for #BrandedContent?..
How Design Engages with the Cultural & Political Climate..
How Should We Measure the Success of Creative Digital Campaigns?..
How Customer Experience Became Adobe’s Favourite Buzzword..
5 User Generated Campaigns That Rocked..
Five of the best IKEA marketing campaigns ever..
Domino’s shows how pizza marketing should be done..
The decline of teen retailers and overtly sexualised branding..
Why big brands and boutique agencies are the perfect match..
Grumpy old rockers – how Supreme educates its disciples...
Fashion & Music – A match made in Hell. Feat. Rick Owens, Raf Simons et al...
Solutions to ad-blocking? Easy, UX and GOOD content...
Ten smart experiential marketing campaigns we’ve seen in London...
Celebrity endorsements and luxury brands – DOs and DON’Ts..
Beauty Brands Online Campaigns: Are they changing the way we define beauty?..
From selling men dreams to UGC: The evolution of car advertising in history...
Is hashtag hijacking a marketing gamble for brands..
4 ways the nature of advertising has changed from the old days...
3 things you need to know about emotionally-engaging branding...
The anti-marketing campaigns: The art of selling via non-selling...
Well-played Halloween ads featuring healthcare, hospitality and science...
5 smart advertising examples that defeated business competitors..
Beauty Brands Online Campaigns Are they changing the way we define beauty..
Ad campaigns / Everybody is talking about the Andy Warhol Museum, a hot dog full of worms, and firecracker Speedos...