App vs. Web: Why native app has not yet defeated mobile web.

‘Our competitors are building apps. We GOTTA have one too!’

This was probably a reasonable conclusion back in 2009 when the app market was still young and fast-growing.

A report in 2013 showed that about 85% of consumers strongly preferred apps over mobile websites, given apps’ quicker loading time and convenience (read more at Econsultancy). 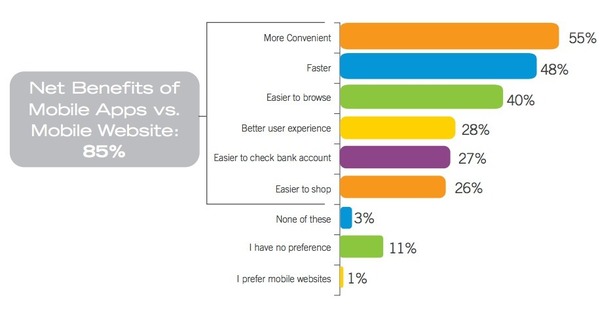 So here is the second myth: Mobile app is the must-have for every business in the world.

To understand why, we need to look at the fundamental differences between these two similar worlds.

MOZ highlighted the key differences by drawing on the strengths and weaknesses of both channels. 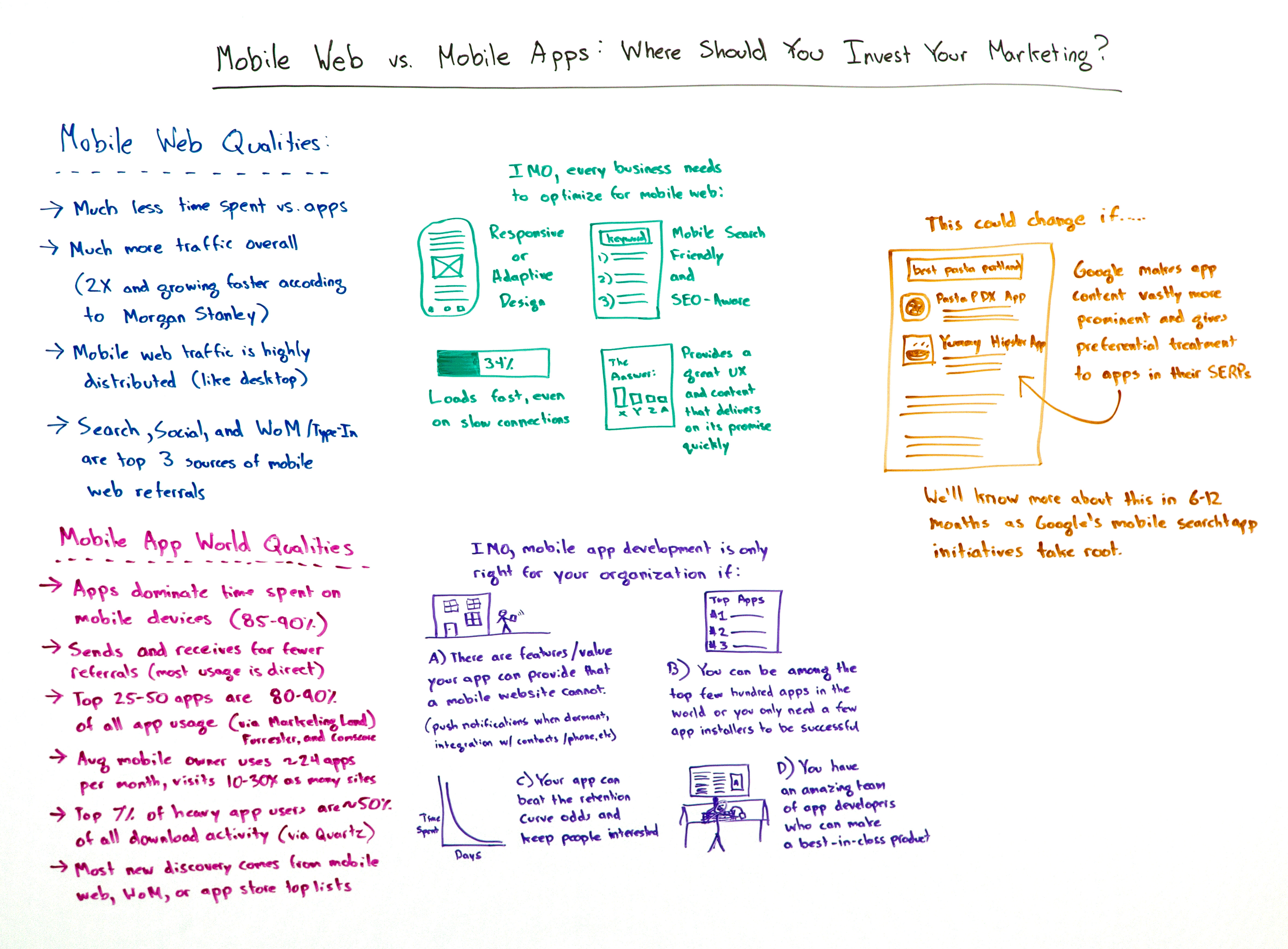 (A summary note from MOZ)

The key conclusions include:

In fact, most of us tend to use the same apps, like YouTube, Facebook, Instagram, Dropbox, Uber and et cetera. The reality is that a large majority of apps are only used once or twice before being uninstalled.

The current problems with apps

From the user’s point of view, problems such as the lack of storage space (by downloading too many apps) and tedious updating often end up in fatigue.

On the other hand, web applications take much less space in mobile devices and the updates can be done entirely on the server, says Ars Technica.

‘Historically, the problem using web applications on mobile devices is that webpages have not been able to do the things we expect of apps: features like pinch and zoom or leveraging local hardware features such as the compass, accelerometer and camera. That’s changing, however, as mobile browsers provide access to local features ’

So should we invest in native mobile app or responsive web?

As you might have already heard this before: it all depends on your end goals.

As things have changed since 2008/9, building an app itself is no longer enough. Along with app development, business needs to consider other important factors: how to boost its visibility amongst today’s overcrowded and competitive app market where the top 5 tend to dominate 80-90% of all app usage.

While some recommend resourceful businesses to have both channels, it is also true that some end up completely shutting down their mobile apps years after the launch. Mostly because users could find the exactly same features offered on both apps and mobile websites.

As it has been mentioned earlier, native mobile apps may not be exactly the first choice if your priority to grow the traffic volume to your business.

On the other hand, it seems that having a quick-loading and SEO-friendly responsive website is a given for every brand.

When to invest in apps then?

Generally speaking, brands or organisations need to satisfy some key benchmarks before deciding on investing in mobile apps, such as:

When mobile web experience is not fit to deliver particular services, features and values.

Having said that, every brand has its unique goal and therefore needs a completely tailored mobile strategy. Some may not need to be ranked on the top few pages in the app market to be successful, whereas others ought to compete harder for visibility.

Yet for many businesses, investing in SEO, SMM and HTML5 responsive seems to offer a sound starting point.

13/01/2016 Apps, Mobile Apps, Marketing, SEO Apps, Mobile, Mobile App, Mobile Marketing, Responsive Design 0. Comments BY Waka
Marketing Strategy for Luxury Sanitaryware: 11 Tips and Marketing Ideas..
Effective Use of Chatbots to Enhance the Customer Service Experience..
Luxury Brand Exclusivity Strategies: Effective Guide to Maintain Brand Perception..
7 Vital Sneakers Marketing Strategies For Ultimate Sales Boost..
Steps by Steps Guide to Digitally Transform Your FMCG Brands..
Millennial Shopping Trends: How Marketers Should Plan for 2023..
Marketing Strategies for Jewellery Brands: Effective Marketing Plan to Power a Winning Strategy..
Streetwear Marketing Strategy: From Market Analysis to Creating Effective Marketing Plan..
1-Click Checkout: How To Provide Your Customers A Painless Buying Experience..
Suggestive Selling: 5 Upselling Tips for Luxury Retail Brands..
Fashion Metaverse: How Luxury Brands Can Embrace the Opportunity..
7 Content Marketing Tips from Entertainment Industry to Gain More ROI in 2023..
7 Prime Whatsapp Marketing Strategies For Ecommerce Brands..
7 Gen Z Marketing Strategies For Retail Brands To Ace Brand Loyalty In 2022..
How AI In Marketing Has Evolved Over The Years To Provide Ultimate Consumer Engagement..
Shopify SEO Strategy Guide: Dominate eCommerce Sales On Google..
Fashion Email Marketing Guide to Achieve Instant Impact on Conversions..
Luxury Product Marketing Guide: Understand Your Consumer And Boost Your Marketing Results..
10 Best Types Of Social Proof Retail Brand Should Leverage..
Holiday Marketing Strategies For Retail Brands In 2020..
5 eCommerce Returns Best Practices: How To Minimize Loss Of Margin..
How COVID-19 Induced Retail's Digital Transformation..
A Safe Guide to Reopening Brick and Mortar Businesses Post COVID-19..
How Increased Convenience for Retail Consumers Garners More Sales?..
How The Pandemic Triggered Black Friday Like eCommerce Sales..
From In-Store To In-Homes: How Retail Brands Should Focus On Engaging Content?..
Curbside Pickup: What Online Retail Brands Need To Know During Coronavirus..
How Tools Like TikTok are Being Used to Exchange Positive Views and Thoughts During These Uncertain Times..
Know How These 6 Brands Are Reacting Digitally to Coronavirus..
7 Important Things to Remember When Marketing in a Crisis..
Inclusive Marketing: How Fashion Brands Can Achieve Hefty Results..
Top 10 Tips to Create In-Store Customer Experiences That’s Shoppers Love..
Purpose-Driven Marketing: How to Make an Impact with your eCommerce..
How to Use AI to Upgrade Your Retail Marketing Automation..
Effective Tips to Increase Commerce Conversion Rate Through Mobile App..
How to Build Customer Confidence with Merchandising and Marketing..
How to Promote Your Products Using Marketing Feature in Shopify..
How to Create a Content Strategy That Increases your E-commerce Traffic Exponentially..
Effective Tips to Create a Marketing Strategy for Luxury Brands..
7 Tips Fashion Brands Should Follow to Create Instagram Marketing Strategy..
Why Should We Partner With Influencers?..
What Tech Startups are Worth Watching in 2019?..
How Influencer Marketing Is Changing Fashion eCommerce..
How to Increase Mobile Conversions with These Checkout Optimisation Tips..
10 Steps to Write Effective Product Descriptions that Sell..
10 Most Effective Marketing Strategies for Fashion Brand..
6 Important UK eCommerce Statistics to Help You Plan for 2018..
How Design Engages with the Cultural & Political Climate..
What Does Influencer Marketing Look Like in 2018?..
How Should We Measure the Success of Creative Digital Campaigns?..
How Voice Technologies will Change the World..
The Return of IRL Retail | Appear Here on Pop-up Stores & Brand Experiences..
Microsoft’s U-Turn on Axing MS Paint after Internet Outcry..
How Customer Experience Became Adobe’s Favourite Buzzword..
App, emoji and VR: How beer marketing taps into the digital zeitgeist..
A quick SEO guide for blogs: how to let more people find your blog..
Menswear eCommerce: Finding best fitting suits made easy online..
#InstagramAlgorithm: Will the end of Instagram’s organic reach mean more brands flocking to Snapchat?..
Mobile live-streaming marketing: The fall of Meerkat..
FinTech: a threat to the traditional banking industry?..
#UX / When are hamburger menus the best navigation solution?..
News apps and UX – who is the winner?..
Why big brands and boutique agencies are the perfect match..
Uber vs. Lyft – The mayhem of on-demand ridesharing economy?..
What makes a good airline website? The one with less stress and more fun...
The impact of online reviews on your business [Infographic]..
Emoji marketing or how brands are capitalising on emoji..
10 latest trends in beauty web design and digital marketing [Part.1]..
Luxury mobile apps: essential or optional?..
5 tips that help you take an Agile approach to content creation..
Food and technology: The impact of digital on food business...
How should B2B companies use Pinterest, Vine, Snapchat and other social media?..
Infographic of the week How to turn your SEO traffic into customers..
Pharmaceutical Companies And Social Media: Why It Works...
Still Invisible? Here is a quick SEO checklist for product page..