The True Value of Bitcoin: Blockchain

In 2017, Bitcoin, and cryptocurrency in general, firmly planted themselves into the mainstream news cycle. Reporting mostly consisted of speculative hype, some critical, some optimistic, about the future of Bitcoin as a legitimate currency and its potential to revolutionise the world’s financial systems. Some saw an opportunity for a new, secure, decentralised monetary system, others saw get rich quick investment opportunities and a speculative bubble. At any rate, Bitcoin is flying a flag for disruptive technology, despite its unpredictability.

Bitcoin’s revolution didn’t happen at the exchanges, nor when it became one of 2017’s buzzwords, but via the blockchain technology that underpins its existence.

Bitcoin was the first application of blockchain technology. The blockchain is a distributed, decentralised ledger which allows transactions to be recorded in a way that is transparent, verifiable and secure. It’s somewhat like a shared database where information can be protected from interference, manipulation or revision.

Bitcoin is disruptive whereas blockchain is foundational. It isn’t simply attacking or subverting existing structures and systems, it’s creating entirely new ones. 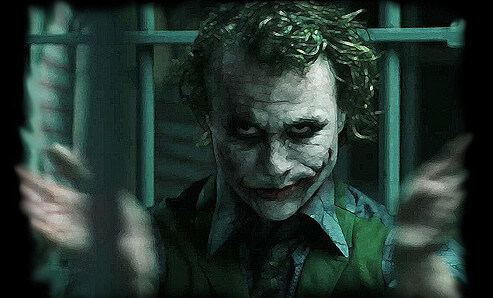 Another disruptive type of ledger – Heath Ledger – as the Joker in Christopher Nolan’s The Dark Knight.

Contracts, records and transactions underpin much of the existing structures in our political and economic systems, and these structures have struggled to keep up with rapid digitisation and increasing proliferation of technology into everyday life. In a basic sense, blockchain removes the need for intermediaries, and so it’s unsurprising that the application of blockchain is currently being driven the financial services industry. The complexity and opaqueness of the global financial system is what creates risk and inefficiency. Blockchain has the potential to remove layers of intermediation, reducing both risk and cost.

The adoption of blockchain across varying sectors will not happen overnight and significant changes are, at best, decades away. But, its adoption isn’t simply utopian idealism that has no real-world grounding. TCP/IP – the technology that laid the foundation for the modern internet – was met with scorn initially and took roughly 30 years from its creation to become readily accepted as a way to transmit information. Similarly, TCP/IP proposed an open architecture whereby no single entity was responsible for controlling, maintaining or developing the internet. In short, TCP/IP turned the telecommunications industry on its head in a way that few people could have imagined.

When it comes to blockchain, cryptocurrency is the first step towards foundational change. Blockchain’s true potential has yet to be fully realised.

17/01/2018 Technology Technology, 3D Commerce 0. Comments BY Tom
15 Most Impactful Ways of Transforming your eCommerce Business in 2023..
Retail Digital Transformation: Key Trends and Innovation Retailers Should Know..
Fashion Metaverse: How Luxury Brands Can Embrace the Opportunity..
Ultimate Personalization: How 3D Printing is reshaping the Luxury Fashion Industry..
What Retail Brands Must Know About The New AR Video Call Filters On Facebook..
How Robotic Fulfillment Technology is Changing The Supply Chain..
11 Technology Trends Retailers Ought To Know In 2022 For Prime CX..
Virtual Try-on Makeup: What Google's New AR Feature Means for Luxury Cosmetic Brands..
Product Demand Analysis: How To Determine Market Demand For A Product Using Technology..
How Tools Like TikTok are Being Used to Exchange Positive Views and Thoughts During These Uncertain Times..
Live Video-Based Commerce: How Retailtainment is Next Big Thing..
Sustainability in Luxury Fashion: Top Brands and Their Sustainable Practices..
Top 50 Retail Innovation Statistics That Helps You to Plan for 2020..
How Effectively Can Data Analytics Scale Up Your Fashion eStore..
How to Use AI to Upgrade Your Retail Marketing Automation..
How to Grow Your B2B eCommerce Store by Using AI..
How 3D and AR eCommerce Revolution can drive ROI..
5 Ways You can Accelerate Your eCommerce Business with Reality Technology..
How Visual AI is Transforming eCommerce..
Should I update my site to WordPress 5.0: Key consideration before updating..
What Tech Startups are Worth Watching in 2019?..
What Is Augmented Commerce and How Can It Help Boost Sales?..
10 eCommerce Retail Industry Trends & Predictions for 2019..
Essential Guidelines to Follow When Designing a Voice User Interface..
How Visual and Voice Search Will Change Fashion eCommerce..
How Voice Technologies will Change the World..
5 Free, Easy Ways to Organically Boost Instagram Engagement..
Does fashion need to re-evaluate its obsession with data?..
Fitness tracker market – Can it become mainstream?..
Is Yahoo doomed? – Shifting focus on valuable content marketing..
How technology is simplifying online grocery shopping...
Are cultural hurdles the biggest challenge to self-driving cars?..
The immersive luxury retail experience: Burberry, Fendi, Givenchy & Marc Jacobs..
FinTech: a threat to the traditional banking industry?..
News apps and UX – who is the winner?..
Technology and online dating: The new normal in match-making...
Uber vs. Lyft – The mayhem of on-demand ridesharing economy?..
The Fourth Industrial Revolution: Davos on the future of business, work and commerce...
Sustainable fashion: No marketing gimmick, feat. Adidas, Auria and Katie Jones..
Solutions to ad-blocking? Easy, UX and GOOD content...
Ten smart experiential marketing campaigns we’ve seen in London...
Fashion and VR: Who’s the real game changer? feat. Tommy Hilfiger, Rebecca Minkoff & Rigby and Peller..
Five ways Magento 2 will benefit the retailers..
So you Googled Digital Agency London, but how do you pick the right digital partner?..
AI in content marketing: Is it killing the human-driven creative sector?..
The return of bricks and mortar? Startups leveraging omni-channel retail strategies..
Hospitality services in the digital age: Leveraging technology for better customer experience..
Food and technology: The impact of digital on food business...
Fashion and technology II: Combining tradition and innovation..
Digital Marketing Review / Best of the Week..
Will we see more apps like Uber? 3 trends that will define the future of sharing apps...
Tiger and Muji prove brick-and-mortar stores are far from dead...
Selfie gadgets that will take the trend to the next level in 2015...
The apps we used the most in 2014...
Fashion and Technology: Can smartwatches make the fashion statement too?..
Oculus VR The future of digital marketing..
This week in social media: People’s reaction to iPhone 6 & the Apple Watch..
5 smart apps to make the most of your summer...
Uber, Airbnb, and the sharing economy – the ultimate solution?..
The generation of me, myself and I – Me-commerce will remain strong. [Infographic]..
Wanna get a sneak peek at a stranger’s life? – Use 20 Day Stranger App...
Skype Launches Free Group Video Calling Service (Finally!)..
5 Online Tools That Will Make Your Life & Your Job Easier...
The Weekly Infographic: Recent Tech Company Acquisitions..
The Future of In store Shopping Experience The Blurring Line between Physical Virtual..
#RIPMSN and no more ‘brb’ – How MSN Messengers shaped Generation Y..
The future of social media? Look at dating sites. No, seriously...
3 reasons we are VERY excited – app can change EVERYTHING!..
Witty Twitter Wars / Feat. Apple, Lotus, the Royal Family and toilet paper...
9 gadgets to have in office RIGHT NOW / Feat. trans-floor slides, Ferrari chairs, and more...
Web Design Now: Digitise EVERYTHING..
R.I.P. Tumblr or: How Yahoo! Just Killed the Kids’ Favourite Social Network..
Facebook Graph Search: a guide for brands and Page admins. Plus, everything you did before will be used against you...
Google Street View maps the Grand Canyon? Cool. ‘The Nine Eyes of Google Street View’? AMAZING...
Felix Baumgartner’s supersonic space jump / A collection of the best memes...
Marketing gone bananas / Fake Apple store in China: ‘iPhone 5 – because you have more money than sense.’..
Fixed gear bicycles and luxury brands / $500k for a bike? Yep. And you have to change the tubes yourself...