From a ‘humble’ teenager selfie to a social media phenomenon – Can charities learn from #nomakeupselfie?

Want to go viral? – Learn from Fiona in Stoke-on-Trent.

Thousands of women posting their own selfies without any make-up on? If this was 20 years ago, when most of us were hiding behind our avatars, no one could have believed it.

Was it Laura Lippman who started it in response to media bashing on actress Kim Novak’s appearance at the Oscars? – Not quite. Though she certainly ‘ignited’ the spark (see more on Western Gazette).

So how did it start?

It wasn’t a social media expert. Neither a charity nor a celebrity. It was actually an 18-year-old girl. All started with a casual, humble selfie taken by Fiona Cunningham in her living room in Stoke-on-Trent after being inspired by Kim Novak (see more on Telegraph).

From zero to 260,000 thumbs-up over a week. From a teenager in Staffordshire to thousands of women around the world. It started with nothing and ended with 8 million donation to Cancer Research UK. 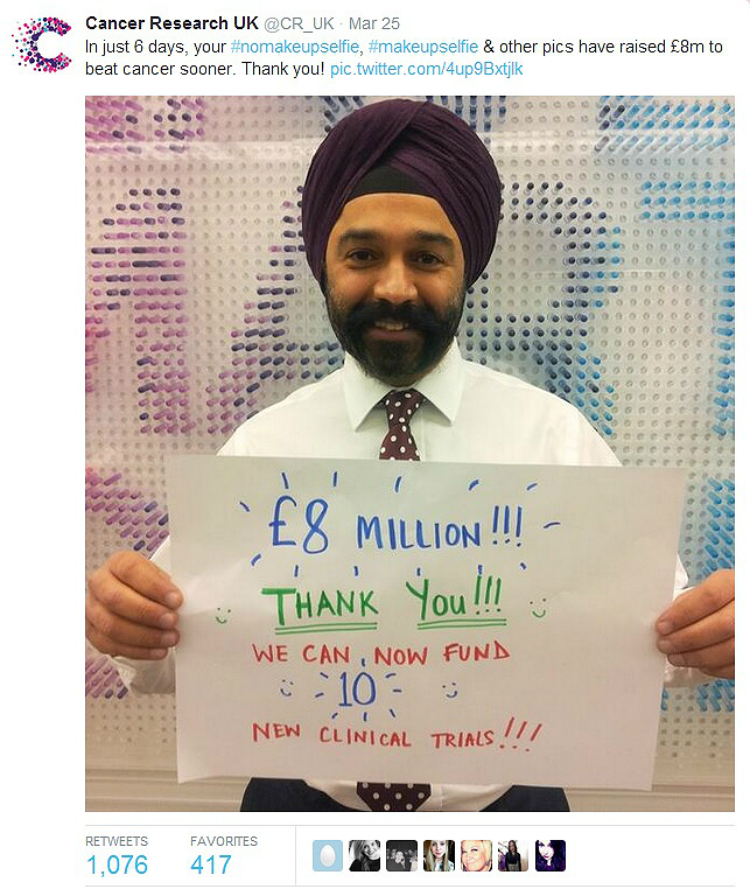 All happened in a week-time. Unexpected and unprecedented.

But not exactly an original idea. Other charities have had some similar ideas. Take for example, #DareToBare campaign. Its campaign logic was to get women sponsored to ‘go make-up free’ by Escentual. Similarly, bare-face was celebrated among celebrities during Children-In-Need in October 2013.

Breakthrough’s #TheChangeChallenge was more elaborate – the charity asked people to make small changes in their life for a day, in exchange of likes, retweets and donation for cancer research.

Charities are supposed to benefit from social media campaigns. Well, they weren’t a disaster – but they just didn’t go as viral as #nomakeupselfie. (Actually, BreakThrough’s rocketing online visitors should be credited to #nomakeupselfie, rather than its own.)

Maybe, just maybe, because this one was more spontaneous than others?

So what can charities learn from #nomakeupselfie?

We have to admit some skeptical opinions. Some saw no relevance to their experiences of cancer. Some selfies didn’t lead to donation at all. Should we interpret that the only way to get awareness was to remove make-ups and have ‘their appearance scrutinised en masse?’ (the Guardian). Wait, is not wearing make-up in public or in front of camera seen as ‘groundbreaking’? (Read more on here.)

Maybe we don’t have to be so critical and judgmental in every single thing on social media. (At least, we know the negative correlation between cosmetics and cancer.)

The bottom line is, this young girl has started something so significant that reached many people and raised 8 million pounds (who knows, maybe the sponsored 10 trials might lead to a big discovery!). People interpret the means differently, but it certainly raised the awareness and made people talking about it. Isn’t that the most important thing in charity campaign?