Domino’s shows how pizza marketing should be done

From L2’s recent study, Domino’s is a clear winner as online ordering has outpaced dining-in by 300%, hitting hard the local pizzerias. Over the past 8 years, the company’s stock price has expanded beyond $7bn from just less than $3 million.

The key to its success? Domino’s has been one of the early digital adopters in the industry. It has done a remarkable work on the tech front, by creating simpler and easier ways for customers to place orders on numerous platforms, ranging from inside vehicles to social media channels. Whilst some restaurant chains tend to piggyback off the constantly changing digital landscape, Domino’s doesn’t shy away from employing the innovative marketing tactics. So what are the most-buzzed and exciting pizza marketing campaigns of all time by Domino’s?

Pizza emoji marketing – Mobile is the focal point of customer communication, particularly when it comes the young demographics. And speaking of the millennials, emoji epitomises the rise of simple and crisp communication trend that’s sweeping the digital landscape. Last year, Domino’s introduced the tweet ordering, letting young pizza lovers to place an order by simply texting or tweeting #easyorder or the same emoji to Domino. 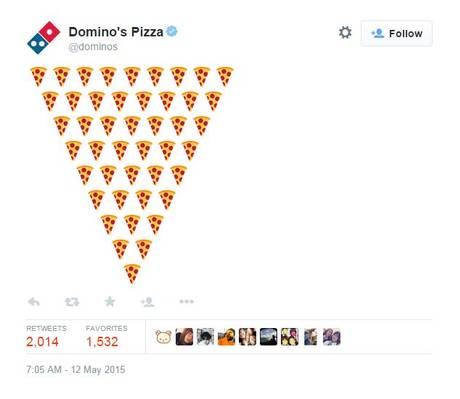 Get creative on Snapchat Even though the brand admits that it will not yet have a ‘defined role’ for Snapchat, Domino’s continue on its experimental phase on the channel to educate and build a healthy relationship with the millennials and GenZ. For example, it’s recent ‘Dough to Door’ Snapchat film invited viewers to find random letters at the end of each sequence that later can be used as a discount code. (image via) 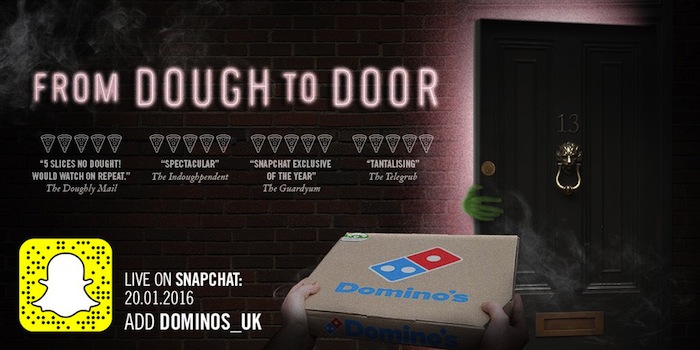 Honest marketing – While others stave off a direct confrontation with negative customer reviews, Domino’s wants to leverage on open communication and transparency. A couple of years ago, the chain took a bold approach to its traditional billboard advertising by posting ALL real-time customer reviews that directly came from its tracker app on a Times Square billboard. By ‘all’, I mean ALL comments including good, bad and those in-between. It was a sort of tipping point for the brand as it had previously focused its marketing effort around ‘public self-improvement initiative’.

Was it a gamble? Yes. Was it powerful? Hell, YES.

It is perhaps the lesson learned from its own bitter experience back in 2009 when a video of Domino’s employees ‘abusing’ customers’ food became sensationally viral. Since then, Domino’s has embedded transparency in its core marketing and communication strategy. The campaign was quite a success as sales increased by double-digits in a year time. Simultaneously, it has also vowed to employ un-retouched pictures of its pizzas for its ads.

Tech-driven, pizza innovation – Recently, the company has announced one of the most exciting and innovative campaigns – an autonomous pizza delivery robot. Currently trailed in New Zealand, it will be the world’s first cutting-edge pizza delivery robot that would take the customer experience to the whole new level.

Speaking of which, do you remember this from last year? Now that April’s Fool stunt doesn’t seem so far-fetched, does it? Let’s hope your pizza won’t get mugged!

The Easy Order – As if Emoji tweet and app are not enough, Domino’s ‘Easy Order’ campaign from last year let you order a pizza to your doorstep only at a single push of a button. Available to a few selected customers, the physical button was synced with the app that has your address, payment and your order details using Bluetooth. Just when we thought it couldn’t possibly get any easier. 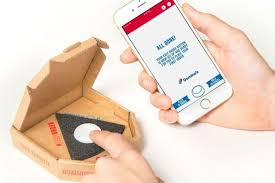 Final thoughts
No matter what marketing gimmicks they use, the purposes have always been to to take the hassle out of the ordering process in an entertaining and engaging way. So here’s a clear message from their successful campaigns to every brands out there: think outside the (pizza)box.