Five of the best IKEA marketing campaigns ever

According to Carnegie Melon, only one book has been distributed in more copies than the Bible — the IKEA catalogue. First appearing in the University of Washington’s student newspaper, the thought-provoking quote surely reminds us of the sheer volume of IKEA catalogues that circulates around us each year: 200 million.

The IKEA slogan is ‘creating a better everyday life for the many people’, and with this in mind the Swedish furniture retailer has focused its efforts on producing customer-centred content marketing to get its message across. The catalogue has long been a cornerstone of an IKEA marketing strategy. But IKEA’s modern marketing approach has also ranged from witty Facebook campaigns to YouTube tutorials and emoji marketing.

So how exactly did IKEA climb up the ladder to become a world-renowned company and what will be the biggest IKEA marketing campaign 2019 might have to offer us? Well, it might help to take a look at overall IKEA advertising history and see where you can pull inspiration from.

The Good Old Books In The Age Of Digital

The ‘’bookbook’’ promo, one of the many witty campaigns found throughout the IKEA experiential marketing timeline, may still be fresh in your memory. Released in 2015, IKEA reassured their faith in the good old printed ikea catalogue by skilfully suggesting that print is not dead through this parody of Apple’s iPhone 6 announcement.

Originally published by IKEA Singapore on it’s YouTube channel, “It’s not a digital book or an e-book,” claims Jörgen Eghammer, IKEA’s Chief Design Güru, “It’s a bookbook.” Thanks to its sarcastic tone and light-hearted approach, the video went so viral that it eventually succeeded in representing IKEA’s global brand. The result was a ridiculous 12 million YouTube views.

Nonetheless, IKEA is not afraid of technology and they are always looking to innovate and experiment. As a matter of fact, it was probably the first furniture retailer to incorporate the augmented reality to help customers make the right purchasing decisions. It was back in 2013 when IKEA rolled out a catalogue app feature called ‘Place in Your Room’ that allowed users to try out their desired products in their homes. As the research has shown that almost 14 per cent of its customers end up taking home furniture which turns out to be the wrong size for its intended location, the feature allows 360-degree room views and videos to help customers find out the best matching products. 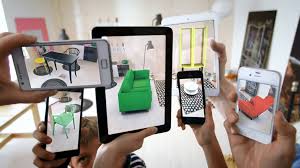 One thing to love about this global brand is that they often stay on top of their highly fragmented market. So, how do you connect with everyone in the face of highly segmented customer groups? You leverage a localised approach. The IKEA UK Marketing Strategy will be different from the American which will be different from the one in Singapore and so on and so on. IKEA faced countless hiccups when it first made it to India and China with their ‘global’ products. But they certainly learned their lesson quickly and IKEA’s now localised IKEA marketing strategies are able to add a distinctive twist on campaigns that make the brand more relatable.

For instance, IKEA Taiwan came up with a witty idea to use ‘hotpot’ – a special dish that brings families and friends together in Asia – to create an unforgettable customer experience. This campaign brings out a salient point to family dinner tables: the lack of meaningful conversations as everybody is just too busy checking their smartphones. The solution: A hot plate that will only turn on when there are enough phones under it. Outcome? Real human interaction and great customer experience. Not to mention that it generated a buzz too.

IKEA also takes a bold approach when it comes to ambient marketing. Their ‘Moving Day’ marketing stunt in Quebec caught passerby’s attention with free boxes of moving, printed with moving tips, checklists, a dinner offer for those yet to set up their kitchens, and a discount offer for IKEA furniture. The result? Store traffic increased more than 14% from the same weekend the previous year, whereas sales increased by over a quarter when compared to the previous year. 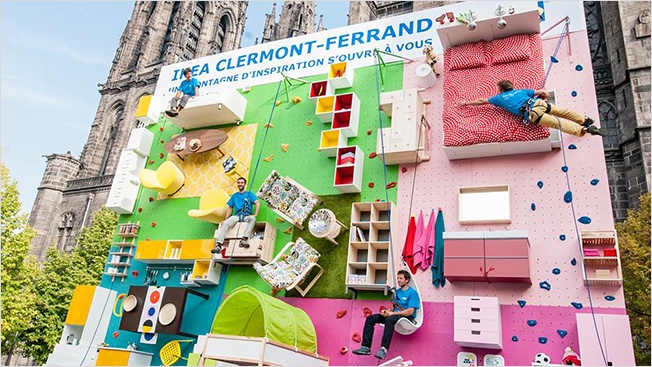 Now here is another incredible IKEA marketing campaign example: IKEA France, to celebrate the 30th store, installed a vertical outdoor apartment billboard which was then turned into a climbing wall. Always experimenting and pushing the envelope as far as possible are key parts to IKEA’s marketing, no matter where in the world it might be. 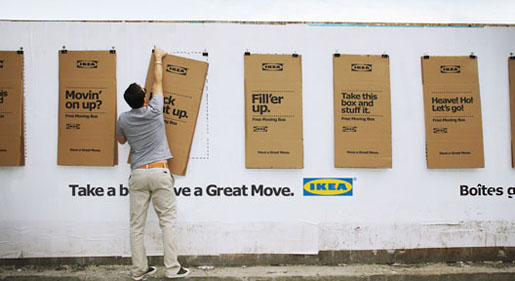 IKEA just have the knack for creating viral videos. From cats to family-themed content, their YouTube videos appeal to a very wide audience. But IKEA’s marketing teams are not the only force behind the scene. If you’re familiar with IKEA furniture, then you’d be also familiar with a lot of DIY IKEA videos posted by fans and customers on YouTube too. From useful ‘How To’ videos to a comedian moving into an IKEA store and the ‘Dead Drunk but Trying’ series (literally drunk people trying to assemble IKEA products), you’ll find a variety of user-generated content featuring IKEA products on YouTube and Vimeo. Whether it’s humourous in tone or more of an IKEA emotional ad, they are always looking to make something that connects, resonates and involves their audience.

Personally, one of my favourite viral IKEA campaigns on YouTube is this one during Halloween in 2014.

By now, you might want to know just what the underlying ingredient of these witty campaigns is. It’s quite simple: they listen. They don’t just pick consumer information from standard surveys and questionnaires. IKEA will actually send design experts to people’s houses to listen to their needs, complaints and concerns. They really try hard to understand their customers to create the right tone of voice and make the brand more relatable to everyday life. The feedback allows IKEA to focus on building effective strategies based on people’s real-life experiences.