Two interesting posts from – as usual – DIGIDAY, about the fact that product shots on Instagram work better than lifestyle-related pictures and content. At least when it comes to cars and vodka.

‘When Honda joined Instagram in 2013, the brand’s agency, RPA, tried to have fun with its Instagram account, posting photos from events and sponsorships or perhaps a picture of the Honda “H” emblem in snow.

Turns out Honda’s followers really just wanted to see a lot of sheet metal. Pictures of Honda cars averaged 3,000 more likes per photo — 300 percent more — than anything without cars in them. It was a “duh” moment for Honda, but it was also slightly disheartening.

“It makes sense, but we were trying to make the brand friendly and approachable and give it texture and personality,” said Alicia Jones, manager of Honda and Acura social marketing. “It’s hard to do that with just photos of cars.”

Instagram has been an important part of Honda’s growth. Not only does it drive some of its highest engagement, it’s also one of its fastest-growing social platforms. “Before social media, we didn’t have the ability to have a relationship with a customer,” said Jones. “They bought and serviced cars from an independent dealer, and their relationship was with the dealer.” Social media has been a way for Honda to sell cars, but also drive affinity and loyalty.

Bottom line is: “Getting too creative and too out there doesn’t always work,” said Jones of Honda. “It’s kind of like that with our Instagram. Just sheet metal.”’ 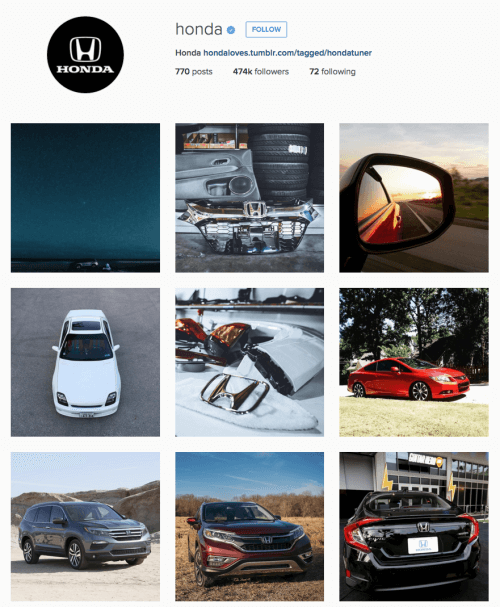 The second is about Stoli’s rule – two out of three pictures have to feature the bottle. Why?

‘A look at the growing Instagram presence of Stoli Vodka finds that it isn’t exclusive pictures of alcohol-soaked parties or shots of Coyote Ugly bartenders that get Instagram followers hitting the like button. It’s something much more prosaic: pictures of vodka bottles.

According to market intel firm SocialRank, bottleshots rank highly among Stoli’s most popular posts. Its most popular post by likes and comments in the past six weeks was this shot of a recipe and a classic Stoli bottle.

Director of marketing Sarah Gorvitz said that, until recently, the brand had been pushing the same content across all three social platforms: Facebook, Twitter and Instagram. In February, the social content team at Stoli decided to “dramatically” shift its strategy to be more analytical. The team looked at the best-performing posts on the platforms and then decided to rotate content so it wouldn’t be the same pictures and videos on the three at the same time.

Until February, the mix of bottleshots versus other content was the same on Facebook, Twitter and Instagram, but Gorvitz upped the number to become 50 percent bottleshots and 50 percent other photos on Instagram by March. By April, it was 60 percent. Today, it’s 66 percent. (The total number posted per day hasn’t changed; it’s still between one and two posts a day.) Gorvitz said engagement — likes and comments — have gone up since she increased bottleshots.’

Another very interesting consideration: ‘About 97 percent of spirits brands are on the platform today, up from 82 percent last year. Most spirits brands find that product-centric content does better on Instagram — basically, bottleshots. That’s in contrast to beer, where lifestyle content resonates equally.’

This whole thing ‘has created an interesting push-pull internally at Stoli too. “Our creative partners often say, ‘really?’ when we ask them to create lots of bottleshots,” said Gorvitz. “But I say, ‘yes, really.’ The ratio of bottleshots has to be higher than any other photos on Instagram.”’ 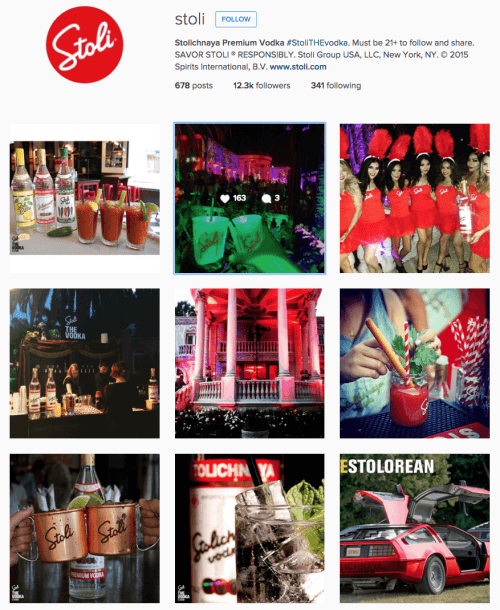 A final thought: do you think brands should adjust their online strategies according to fans and followers’ taste and number of likes on single posts, or should they somehow impose the type of content they consider relevant, when it comes to branding and building image and identity?