As the 2014 World Cup kick-off coming on the 12th June, the excitement is soaring. Even for people who aren’t massive football fans, the World Cup still means something. Partly because of the hype created by big brands’ persistent marketing. This once-in-a-millennium event means something remarkable for many brands.

There are billions of passionate fans in 32 countries, making a huge potential market for brands (Visual.ly). The World Cup marketing battles have already heated up among the brands. And in some, we are already getting some ideas of who is going to win this year.

Nike, while not an official sponsor of FIFA World Cup, has made itself to the top of social media marketing without using the words ‘World Cup’ or ‘FIFA’. 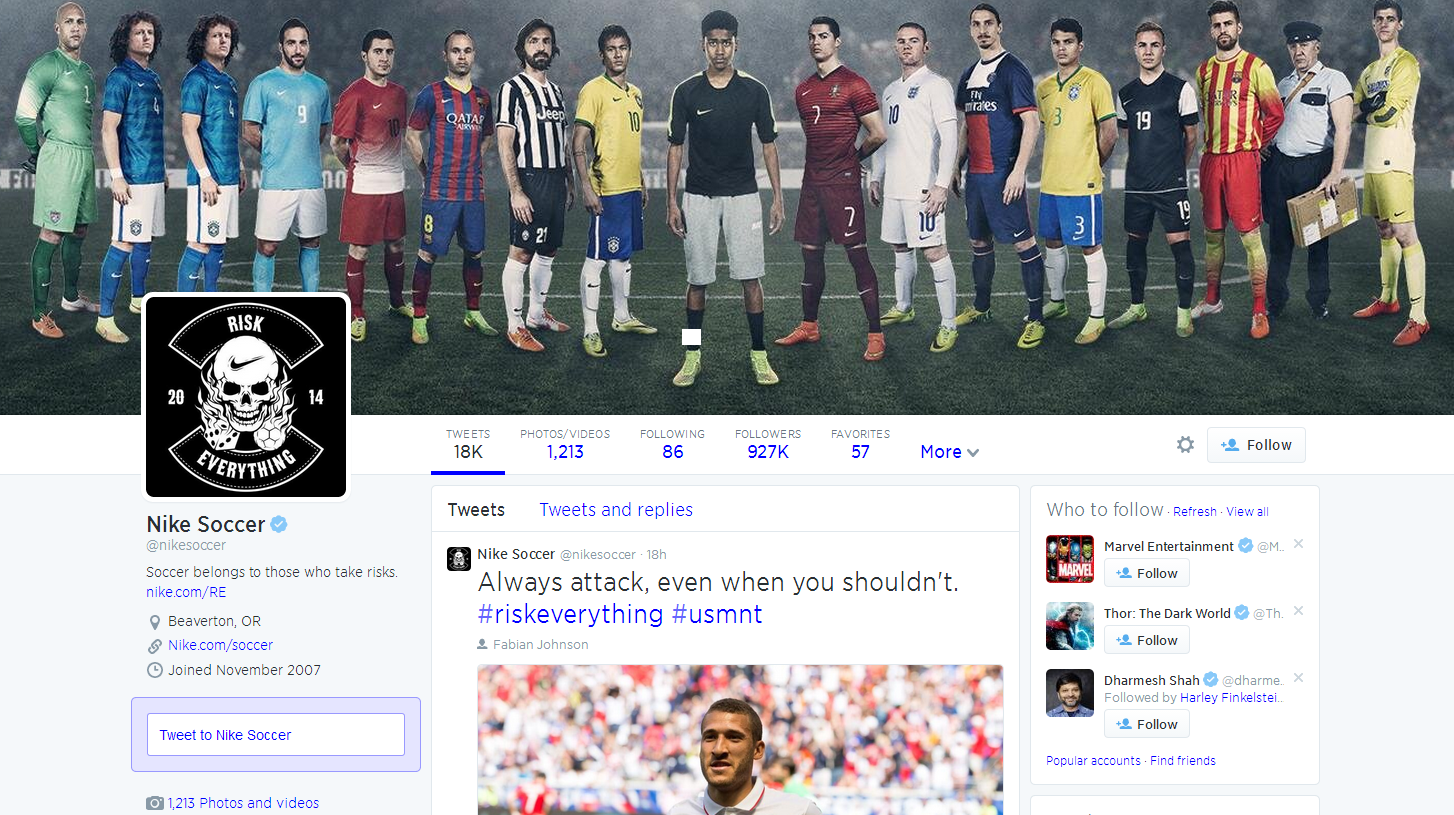 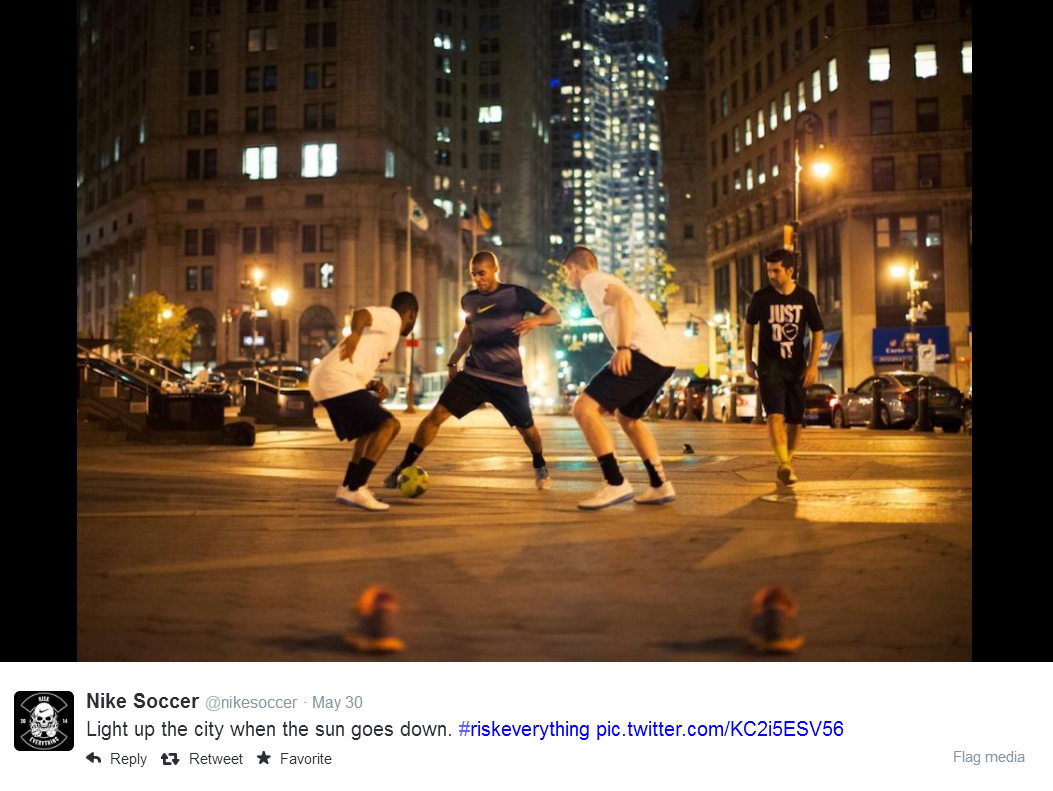 Its Vine account also uses hashtags with its product names, like the one featuring Kobe Bryant and Iniesta. Fans are asked to post and share their original vine videos, featuring Nike’s football shoes. Now let’s look at its direct competitor, Adidas, which is the official sponsor for 2014 FIFA World Cup.

Adidas’s #allin or nothing

‘The ‘all in or nothing’ campaign is Adidas’s biggest ever campaign in terms of media spend’, according to Marketing Week. Adidas’s new World Cup campaign, featuring Messi has a strict philosophy. Viewers are asked to choose ‘all in’ or ‘nothing’ at the end of the video. And only those who choose ‘all in’ are invited to take part. 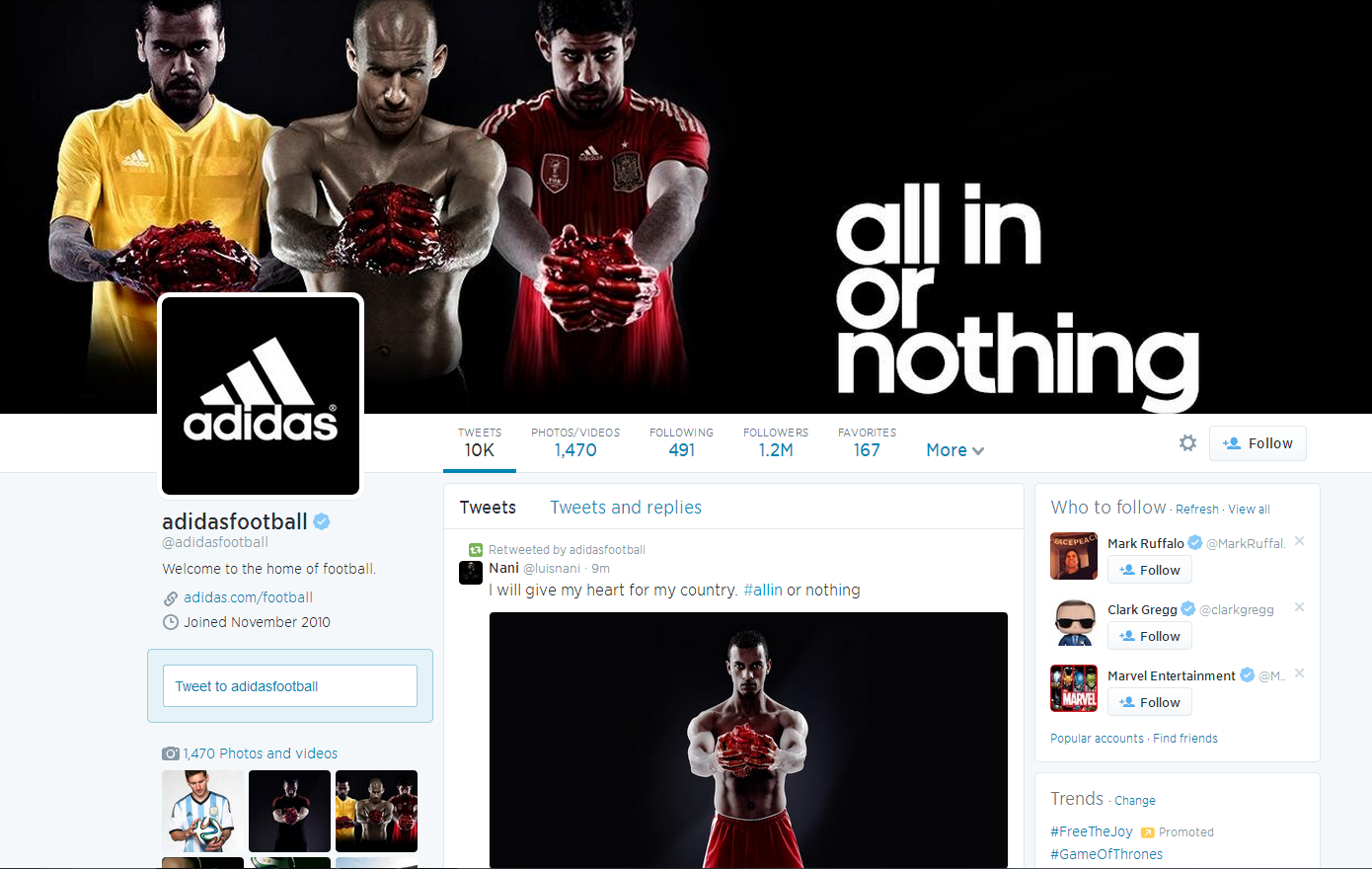 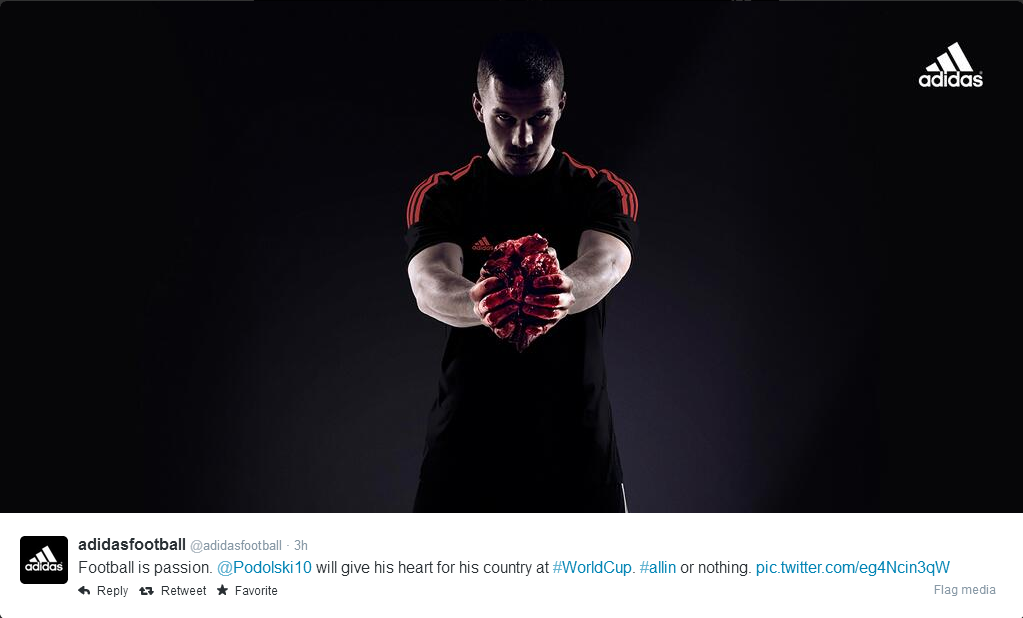 (Adidasfootball on Twitter) So, who is the winner so far? I would say it’s Nike. It’s a big win in terms the casting (come on, even Ronaldo’s girlfriend and Incredible Hulk are in it). And the number of views on YouTube (though Nike’s campaign started earlier).

But it’s not just that. I personally feel that Nike’s videos are more cheerful with some fun jokes, while Adidas’s is a little bit tense. ‘I will give my heart for my country.’? Oh please, I thought the World Cup was going be in Rio de Janeiro, not Pyongyang. Nike seems to be better at capturing both passionate football fans and the general public. Having said that, we will never know as the both brands seek to create real-time conversations using social media after the kick-off (see Creative Review).

More into betting than kicking?

Not everyone is into sports, as in “run and sweat” kind of thing. So how companies should market to those who ‘passively’ engage with the World Cup? Big betting companies like William Hill’s ‘‘Make Every Moment Matter” campaign tell the viewers that every aspect of a game including corners and penalties is a ‘chance to bet’ (see Marketing Magazine). Even for people who don’t play the football, every moment in a match can be thrilling.

Not so bad, if you compare with its competitor Ladbrokes whose ads attracted negative responses and complaints from the advertising watchdog for ‘glamorising gambling’. (see Campaign). 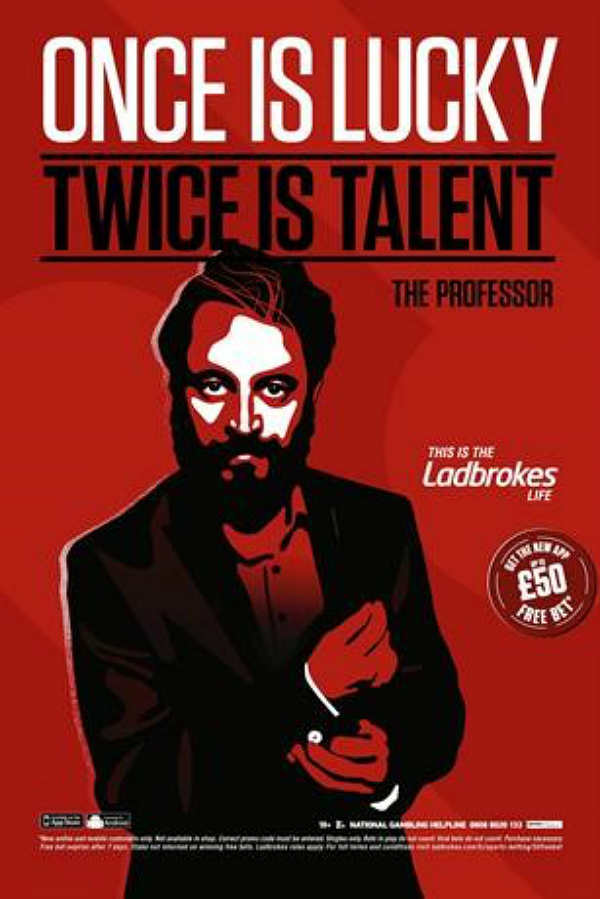 Paddy Power seems to be ahead in the game by featuring Professor Stephen Hawking in its intelligent marketing campaign (PR Week). Here’s Professor Hawking’s analysis on England’s chance to win based on “general logistic regression modelling”.

Suddenly the odds of winning seem to be higher, doesn’t it? What do you think? Appnova is a digital agency specializing in web design, UX, e-commerce, branding, digital marketing and social media. Keep following us on Twitter @appnova and “like” us on Facebook for useful news and tasteful digressions about geeky stuff. Images: PR Week
SHARE THIS ARTICLE:

05/06/2014 DigitalMarketing AD, Marketing, Social Media, YouTube 0. Comments BY Waka
Tinder Advertising: The Pragmatic Guide to Reach Young Audience..
5 Shopify Store Local Delivery Tips for Epic Sales..
7 Prime Whatsapp Marketing Strategies For Ecommerce Brands..
7 Gen Z Marketing Strategies For Retail Brands To Ace Brand Loyalty In 2022..
7 Vital Luxury Retail Marketing Trends To Gain Ultimate Sales In 2022..
5 Content Marketing Tips From Entertainment Industry To Gain More ROI in 2022..
How AI In Marketing Has Evolved Over The Years To Provide Ultimate Consumer Engagement..
Shopify SEO Strategy Guide: Dominate eCommerce Sales On Google..
Luxury Product Marketing Guide: Understand Your Consumer And Boost Your Marketing Results..
5 Practical Strategies to Market Your Luxury Furniture Brand..
10 Best Types Of Social Proof Retail Brand Should Leverage..
Touchless Future: How To Create Memorable Online Customer Experience..
Reshaping Hotel Customer Experience Strategy Post COVID-19..
Pull Marketing Strategy: Learn How To Attract Your Audience..
How Beauty Industry Is Adapting In The Mask Age?..
Try Before You Buy eCommerce: Ultimate Customer Satisfaction and Convenience..
How Retail will Adapt Experiential Marketing in The Covid-19 Era..
How Increased Convenience for Retail Consumers Garners More Sales?..
Why Restaurants And Food Businesses Need To Move Online Amidst Covid-19..
How to Strengthen Your Customer Service With Personalised Support..
How Social Distancing Has Changed Shopping Behaviors..
7 Important Things to Remember When Marketing in a Crisis..
Live Video-Based Commerce: How Retailtainment is Next Big Thing..
10 Trends That Will Help Your Luxury Fashion Brand Stand Out in 2020..
Millennial Shopping Trends: How Marketers Should Plan for 2020..
How Facebook Analytics Help You Drive More Sales..
How to Modernise Your Traditional Brand Through Digital Marketing..
5 Key Differences between B2B and B2C Marketing..
10 eCommerce Tools to Check up on Your Competitors..
How to Optimise Your Retail Brand for Voice Search..
Voice Search Optimisation: What Does It Mean for Your Brand?..
How to Use Referral Marketing Practices in Your eCommerce Business..
Why Is Video the Most Powerful Form of Content in eCommerce?..
5 Tips to Increase Your Sales with Retention Marketing..
SEO Strategies to Optimize Your Website for Voice Search..
5 key Tactics for Growing a Fashion Brand Through Social..
What does the Facebook News Feed Change Mean for #BrandedContent?..
What Does Influencer Marketing Look Like in 2018?..
How Should We Measure the Success of Creative Digital Campaigns?..
How Voice Technologies will Change the World..
5 Free, Easy Ways to Organically Boost Instagram Engagement..
How Customer Experience Became Adobe’s Favourite Buzzword..
5 User Generated Campaigns That Rocked..
To Helvetica and Back: Typography, UX, and the World’s Most Famous Font..
App, emoji and VR: How beer marketing taps into the digital zeitgeist..
Domino’s shows how pizza marketing should be done..
A quick SEO guide for blogs: how to let more people find your blog..
The key trends in digital language learning..
The evolution of diamond marketing..
The decline of teen retailers and overtly sexualised branding..
Email marketing strategy: the lessons from fashion eCommerce sites..
Automotive digital marketing: car brands on social, email and mobile..
Fashion & Music – A match made in Hell. Feat. Rick Owens, Raf Simons et al...
Burberry – from chavvy to tech-savvy...
Celebrity endorsements and luxury brands – DOs and DON’Ts..
Jetsetter’s blog – not your usual cheesy, expected #ContentMarketing. Brilliant...
10 latest trends in digital marketing for beauty brands [Part.2]..
Tumblr Blogs of the Week – SVRPLVS, SHARI VARI and The Denim Industry...
10 latest trends in beauty web design and digital marketing [Part.1]..
From pure story-telling to story-showing: What makes a lifestyle eCommerce? Part.1..
Beauty Brands Online Campaigns: Are they changing the way we define beauty?..
Ads, apps and mass customisation: The key trends in digital marketing for activewear..
Five of the best #Menswear Tumblr blogs in the Universe, from food + clothes to branded...
Here is why Facebook See First will reward creative marketers over the SEO Guru...
From selling men dreams to UGC: The evolution of car advertising in history...
Hospitality services in the digital age: Leveraging technology for better customer experience..
5 tips that help you take an Agile approach to content creation..
Setting social media personas as the priority of your SMM strategy...
Email marketing remains powerful despite the growth of social media. So? Invest in both!..
Embedding CSR in digital marketing strategy: why brands are not getting it...
Fashion brands, Tumblr and Millennials – Urban Outfitters good, Dior meh...
Digital Marketing Review / Best of the Week..
4 ways the nature of advertising has changed from the old days...
3 things you need to know about emotionally-engaging branding...
The anti-marketing campaigns: The art of selling via non-selling...
Sneaker brands on Tumblr 3 different brands 3 different angles..
Food and Social Media How these successful food brands got it right..
Oculus VR The future of digital marketing..
Digital marketing trends for restaurants Recreating tasty experiences in 4 unique ways..
The perfect hotel experience Heres all you need to know..
5 things that your luxury property website should feature NOW...
Menswear eCommerce: how to capitalise on the fashion-unconscious?..
Which CMS is best for your company?..
Digital Marketing Strategy Shotgun or Rifle Approach..
15 crazy things people search on Google [Infographic]..
Beauty Brands Online Campaigns Are they changing the way we define beauty..
How to master SEO? – Ask Bruce Lee...
How to LOSE Twitter followers in 15 ways [Infographic]..
Functional marketing – If Porsche sells “Emotion”, the economy car should go for “Motion”...
Using Tumblr for Marketing? (Infographic)..
How is fashion e-commerce selling summer on social media? Part.1..
Myspace’s new marketing strategy: “We have your pics, please come back. PLEASE.”..
2014 World Cup Marketing Battles Part 2 – Coke, Pepsi, Foca Beer and Budweiser..
Looking for a powerful spokesperson? Meet Mr. Tomatoman...
Facebook’s Organic Reach Is About To Hit ZERO – How Small Brands Can Deal With It...
Advertisements Moving into Space A drinks brands mission to the Moon..
The power of 6 seconds Business corporations on Vine and other video platforms..
The end of oligarchy: How can accessible luxury brands woo new China?..
Do You Have a Powerful Content Marketing Strategy Infographic..
Despite what you sell, Tumblr is good for your business. Very good...
5 keys to powerful storytelling that engage consumers emotionally..
How to Master Infographics? – 5 Simple Design Tips..